The Sound of Mur 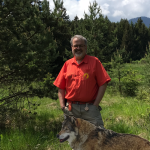 And it really was throwing myself straight in. Thursday morning I spent in the office and then in the afternoon, the team took the car and drove to the village of Muhr, where we had been invited to the grand opening of a new national park exhibition. It was all about the River Mur – Austria’s second largest river, which has its origin here in the Lungau, but also flows through National Park Hohe Tauern, and actually most of Austria (it’s long).

So we went along in our uniform of bright orange shirts, standing out amongst all the officials dressed more traditionally in Lederhosen. There was a band, many rounds of thanks and applause, a cutting of a (blue) ribbon, and then we were set free on the exhibition. I was really impressed, there had clearly been a lot of time, thought and money that had been poured into this project. A counter by the doorway indicated how many seconds had passed since the birth of the Mur (around 383 billion, if you’re interested), and there were tonnes of interactive exhibits, panoramic photos, and information in both German and English.

We did some networking, but since my German is currently limited to impractical words such as wassermelone, fledermäus and schmetterling, (watermelon, bat and butterfly!) I just shook a lot of hands and played with the exhibits. There were interactive games, but also more abstract exhibits like a button for every different sound the river would make on its journey.

Making myself at home

Friday evening I moved rooms, so I have left the Pension and I’m in a little room on the top floor of a house on the Marketplace.  Nick was a trooper and carried my heaviest bags up three flights of stairs. The room is simple, bright and clean and I already feel at home. My plants are also perking up with the extra light and when I open my curtains in the morning I’m greeted by the mountains. I couldn’t ask for anything better.

The time is flying by, I can hardly believe I have finished my sixth week here. This week was an extra happy week, I feel like I am (finally) settling in. Whilst I still miss home and my family, the joy of living and working in Austria is outweighing the feeling of homesickness. Austria – the people and the mountains – are sinking into my bones and I’m starting to feel like I can actually do this. I’m ready for whatever this year wants to throw at me.